Alex Berenson was born on January 6, 1973 in New York. Berenson was a business reporter for the Denver Post and in two years produced 513 articles. For three years he worked for TheStreet, an online financial paper. He then joined The New York Times as a business investigative reporter. Berenson covered stories such as the occupation of Iraq and the Bernard Madoff Ponzi Scheme. In 2010 Berenson gave up his job to become a full time writer. 'The Faithful Spy', the first book in the John Wells spy series won the Edgar Award for the best novel by an American author in 2005. The Silent Man is the third book of the John Wells series. 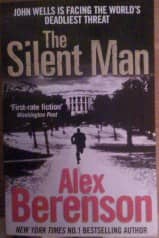 Book Review:
Alex Berenson - The Silent Man
John Wells has many enemies. His girlfriend is left for dead in one attack. Wells discovers a plot which he has to stop at all costs.

Bulk Buying
You can combine orders to get more bang for your buck.
A quantity of books ordered brings the unit delivery price down.
The following rates apply.
Allow 5% of weight for packaging. Email me at aidansonlinebooks@gmail.com (Use Contact button at top of page) for more details.