Carrie Fisher was both an actress and a writer. She is most famous for her part in the first Star Wars trilogy, in the role of Princess Leia. This role has now been revised in the film, The Force Awakens. She has also appeared in the same role in the Star Wars film The Last Jedi, which is Episode v111. Her semi-autobiographical novel, Postcards From the Edge received wide acclaim. Delusions of Grandma is another novel by Carrie Fisher published in 1993.
Carrie Fisher stopped breathing and became unresponsive on a flight from London to Los Angeles on December 23, 2016. She died in the Ronald Reagan UCLA Medical Center, on December 27, 2016.

Postcards From the Edge

Book Review:
Carrie Fisher Postcards From the Edge
Suzanne Vale, an actress is clawing her way back from the edge in a drug rehabilitation clinic.
A victim of Hollywood`s making it and faking it, glitzy wheeler dealers, her conversations with a psychiatrist are now the order of the day.
Carrie Fisher`s deft portrait of the clinic and its inhabitants are simultaneously harrowing and hilarious. 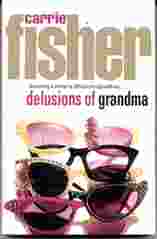 Book Review:
Carrie Fisher Delusions of Grandma
When screenwriter Cora discovers she`s pregnant, she begins to lose the superfluous things in her `big, loud life`. One of which is the father of her child.