Duncan Fallowell was born on September 26, 1948 in London, England. Fallowell writes novels, travel books and is also a critic, writing for the Specator. Satyrday is Fallowell's first novel. This was followed up by The Underbelly. Travel books by Fallowell include To Noto, (South of France), One Hot Summer in St Petersburg (Russia) and Going As Far As I Can (New Zealand). 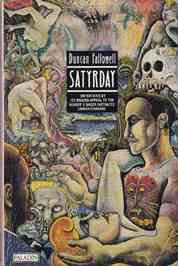