Paul Carson is a doctor living in Dublin, Ireland. While practicing in Australia, Paul Carson became interested in the field of allergy and continued in a specialist unit in the UK. He returned to Ireland in 1984 to set up his own practice. He has since published several health books concerning children's health Scalpel is Carson's first medical thriller and has been followed by five others.

Book Review:
Paul Carson - Scalpel
A killer is stalking the corridors of Dublin`s Central Maternity Hospital. A young laboratory assistant is found brutally murdered at her bench. The only clue is a blood-stained scalpel. DS Kate Hamilton leading the investigation believes that the murderer is from within the hospital. But there is little time as a baby has also been kidnapped. 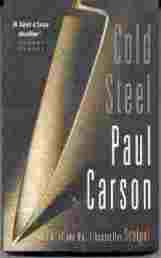 Book Review:
Paul Carson - Cold Steel
The body of a teenage girl is found in a Dublin park. She has been brutally stabbed to death. For Dublin`s police and politicians, the nightmare is just beginning. The dead girl is the daughter of a high-profile American surgeon who heads the Mercy Hospital`s new Heart Foundation. 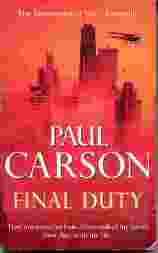 Book Review:
Paul Carson - Final Duty
They murdered his boss, stalked his family and invaded his home..Now they want his life.

Book Review:
Paul Carson - Ambush
Dr Scott Nolan's wife, Laura has beenkilled in an ambush. He collabborated with his brother-in-law, Mark Higgins in an edgy plot to catch the killer. Is he prepared for what follows?